A day in the life of a Foster Carer: Part 1, the day our foster child arrived 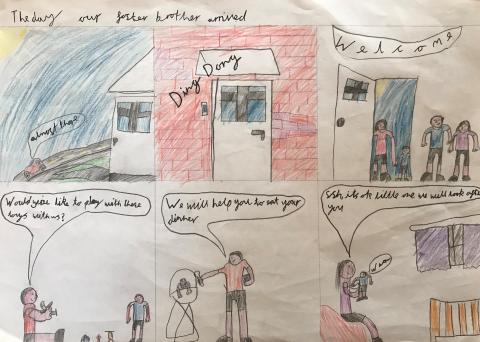 The day had finally come

Just over a year after we had made our initial enquiry, and attended a fostering information session, we were awaiting the arrival of our first child. It had been a busy year, being assessed, trained and then finally going to panel to be approved as Foster Carers.

We had mixed feelings. We were excited to begin our fostering journey and couldn’t wait to make a difference to a child in need; but we knew this day would be difficult for the child, who was being separated from their family and their home. We knew they may feel distressed and worried.

We spent a lot of time preparing our birth children for our fostering journey. We wanted them to understand that the child may not arrive today, or that there may be a new face at home after school! We waited to hear the court decision, which confirmed that the child would be taken into the care of a foster family to keep them safe.

We received a call to say that the social worker was on her way to our home. The house was clean, the bedroom was ready, the cot was made, the high chair and car seat were in position and the toys were ready to be played with. Dinner was prepared, allowing us to dedicate as much time possible to the child.

The doorbell rang, and we were met by a friendly social worker with bags of the child's belongings. The child, D, had fallen asleep on the car journey and had just woken up.  Something we soon got used to as a usual occurrence for D!

Play time and the first of many milestones

We were introduced to a small boy with big wide eyes, looking very timid and wary. We all sat down on the floor with him, and our youngest son started playing with some Happy Land toys and tried to encourage him to join in. D soon started playing with the cars (they become his favourite) and allowed our son to pass him new cars to play with. I showed him an aeroplane which made a flying noise, and he jumped and looked terrified! A quick lesson was learned, and we put the noisy toys out of the way for the time being. I took a photo of D playing nicely with the toys, never realising the image would stay in my mind throughout his time with us, allowing me to compare how far he had come along. It was the first of many milestones.

After the social worker had left, we made dinner and encouraged D into his high chair. It was obviously unfamiliar to him and he disliked being strapped in and really objected to wearing a bib! We compromised, keeping him strapped in for safety, but ditching the bib, distracting him with the food. He was happy to eat, picking up large pieces of pasta in his hands and eating well. He allowed the children to feed him a little but was unfamiliar with being fed and preferred helping himself. We saw some smiles, especially when the children were around him. For pudding, we fed him a spoonful of yogurt, which he disliked and immediately vomited! We made a note to ask again if D had any allergies.

Bed time and a long night

After feeding himself pasta bolognaise and vomiting yogurt, it was definitely bath time! We noted some bruises, scrapes and soreness on him when we washed him and again, he wasn't keen on the experience, so we kept it quick.

D was fairly calm after his bath, so I took the opportunity for a nice cuddle. I clipped his long nails and sat gently combing out the many matts in his hair as I sang to him calmly. Clean nappy and PJs on, and he was ready for bed. His Mum had packed some of his things, including some blankets. The blankets were slightly dirty, but I had been told by other Foster Carers not to wash them immediately, as the familiar smell would provide comfort and reassurance.

We read a story, dimmed the bedroom lights, and lowered him into his cot after a reassuring cuddle. This was unfamiliar, and he refused to lay down, or even sit down. I continued to sing to him as I sat next to the cot stroking his head. He cried and cried and was becoming increasingly upset. I cradled him in my arms to soothe his tears and rocked him to calm him. The cuddling, rocking, reassuring, singing and calming went on for about 4 hours. We tried everything we knew had worked with our own children when they were little, but nothing worked. In pure exhaustion, he fell asleep in my arms, but every time I moved, he cried and awoke. It was a long night, with many wakings thorough the night and little sleep for all in the house. But we all got though it! We had done it and our journey had begun.

Due to Coronavirus, our team our working remotly, but we are continuing to welcome fostering enquiries and applications because there remains a priority need for children to have safe and loving foster families. We are conducting information sessions, initial enquiries and home visits via WhatsApp, Skype and Microsoft Teams and we are working closly with new applicants to progress their applications.

Please e-mail fosteringrecruitment@brighton-hove.gov.uk for details of our next virtual information session.