A day in the life of a Foster Carer: Part 3, playgroup 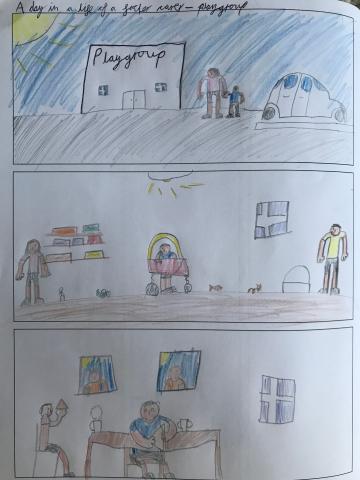 Today started as most days do, with the chatter of a little voice. D was awake! He greeted me with smiles and cuddles as I lifted him out of his cot. Life can be busy in foster care with appointments and visits, but today we had nothing scheduled in, so I was planning to take D to playgroup for the first time.

We got dressed, had breakfast, took the older children to school, then drove to a local playgroup.

As we walked towards the playgroup, D was excited to discover a new place, and keen to get inside. We started early with road safety and I encouraged D to hold my hand whilst he was on the pavement and took time to look for cars carefully before we crossed the road. He found it hard initially to hold my hand but was getting much more used to it as a routine.

We walked into the playgroup and D was so excited. He walked from room to room, from toy to toy, from child to child. There was so much to see and do and he was so excited. I followed him around, discovering all the fun things to do. He watched the other children and wanted to do exactly as they were doing. We encouraged sharing and taking turns. We played with cars and trains and enjoyed the painting table, trying to aim the paint onto the paper, instead of ourselves!

He then saw the big red car that the other children were whizzing around in and made a bee line for it. I hung back a little, keeping him in sight, but allowing him the freedom to play independently with other children as he gained confidence. He tried to get into the car with another child, but there was not room, so I encouraged him to wait his turn. Getting restless waiting, he started to push the other child around in the car. The other child giggled and squealed in happiness and her grown up confirmed she was enjoying the ride, so we both watched on as they had fun.

I noticed the lady who ran the playgroup had an iPad and was taking photos of the children.  Because D is a child in care, any photos taken of him need to be kept safe and confidential and cannot be used on social media. I spoke to the lady and explained that I was looking after D and that I could not give consent for his photos to be taken. She was very understanding and showed me the pictures she had taken before deleting them in front of me. She explained that she was taking the photos to use on social media to promote the playgroup.

One of the other mums brought me a hot coffee and a biscuit. It was so nice to be able to have a hot drink and sit down, whilst D played happily. As he spotted the biscuit in my hand, he ran back to me. We shared the biscuit and I gave D his own snack and drink.

Playgroup ended with circle time and singing. D got frustrated as the toys got packed away and he wasn’t keen to sit still in a circle. He kept wanting to get up and wander around the room. As I bought him back to the circle, he was bemused by the singing, looking around at the children and grown-ups, but not keen to join in.  The final song was the Hokey Cokey and I lifted him up and swung him around in the chorus line with all the other children. He didn’t resist me and as I looked at his face, he was beaming! The more we did it, the more he began to chuckle and laugh. It was magic to see.

As playgroup came to an end, we waved goodbye and he reluctantly left. He had used up so much energy, I knew he would be tired. I strapped him into his car seat and as soon as I started the engine he was asleep. We arrived home and whilst he slept, I used the opportunity to check emails and reply to messages.

We had a quiet afternoon, playing in the garden and playing with toys in the house. He loves toy cars and carries them around with him wherever he goes so I am always finding them all over the house. We zoomed the cars around the toy garage lots!

When the other children returned from school, we all sat together for, then took D up to bed to begin his bedtime routine. It was the same every night and the routine was really helping him to sleep better - bath, teeth, story (as many as he could get me to read) then cuddles and sleep. I gave him one last kiss goodnight and dimmed the room light down for sleep.  He fell asleep quickly and calmly. It had been a good day.