A day in the life of a Foster Carer: Part 4, Me and My World review 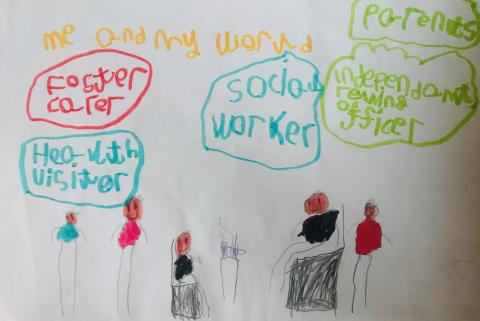 Today we had an important meeting, which was to be the first of many for D. We were to attend his first ‘Me and My World’ review.

In preparation, my Supervising Social Worker spoke with me about what the meeting would involve and what I could expect. She also asked me to write a letter, addressed to D. I spent some time reflecting on the time D had been with us; from the day he first arrived, to today. I wrote in detail about how he had settled into our home, and the way he had adapted so well to the changes. I felt immensely proud of him for settling so well into what must have been such a challenging situation. So, I told him this in the letter! ‘Me and My World’ letters are written to children in foster care so that in the future they will know how they began in fostering and understand the milestones they have reached.

Since our fostering journey began, we have had to get to grips with the appointments and visits that each foster child needs. We knew we would meet many people involved in D’s care.

I felt apprehensive initially as this was our first MAMW meeting, but my husband joined me so he could also meet D’s parents. As D was not in school, we had to arrange childcare for him during the meeting, so everyone could talk freely about D.  He was tearful as we left him but was soon distracted and settled quickly without us.

We arrived at the meeting which was held at the Contact Center, a now familiar place to us. We met our Supervising Social Worker who was there to support us, D’s Social Worker, D’s parents and an Independent Reviewing Officer (IRO). The IRO was there to chair the meeting and to ensure everyone was given the opportunity to speak fairly. She was kindly and welcoming to us. The Health Visitor and Children’s Guardian were also involved in D’s care, but unfortunately sent their apologies for today’s meeting.

After introductions, the Social Worker updated us all on what had been happening since D was brought into care and D’s parents were able to ask questions about his progress. I took the opportunity to voice how well we found D to have coped with the changes and settling in to a new routine, to reassure his parents he was happy.  I was also able to update D’s parents on the Health Visitor’s recent visit and the progress D was making.  D’s parents were asked if they had any further questions and they voiced that they felt he was being well cared for. This was so lovely to hear as we work hard to give D the best care we can. We appreciate this must be hard for parents.

Near to the end of the meeting, a further date was planned for the next MAMW review and we all left.

When we got home D was pleased to see us and greeted us with cuddles.

We spent the afternoon at the park with D as he had missed us this morning. He loved running around the park from slide to swing to sandpit. As he was still little, we stayed close to him. He wanted to run, but wobbled a little and had a great enthusiasm for adventure!

As usual we ate dinner as a family. D was making great progress using a spoon himself, something unfamiliar to him when he first joined us. We gave him lots of praise.

He fell asleep quickly tonight, an afternoon in the fresh air always has that effect on him. I kissed him goodnight on his forehead and left the room to begin bedtime with the other children.

Due to Coronavirus, our team our working remotly, but we are continuing to welcome fostering enquiries and applications because there remains a priority need for children to have safe and loving foster families. We are conducting information sessions, initial enquiries and home visits via WhatsApp and Microsoft Teams, and we are working closly with new applicants to progress their applications.

Please e-mail fosteringrecruitment@brighton-hove.gov.uk for details of our next virtual information session.